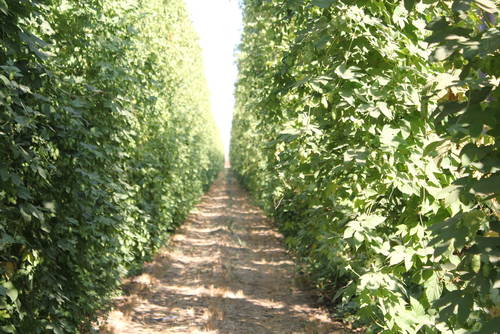 Our mid-season crop report is designed to discuss the first half of the growing season, and identify any problem areas that we see. The biological changes that happen between now and harvest are substantial, so it would be irresponsible of us to report any yield estimations. Numbers of cones, dry matter, cone weight all play a part in the final yield numbers, and Mother Nature can still have a profound impact on the hops. With that said, we will discuss the plantings, weather, and any issues.

As we posted last week, we have added several new growers for the 2014 crop year to meet the growing demand from contracts, including acreage in Idaho and Oregon. The year started with cutting over 7 million rhizomes to plant the more than 1300 new acres of Simcoe®, Citra®, Mosaic® and Equinox™. We were able to get almost all of the Simcoe® and Citra® in the ground with 6-8 roots per hill, which should give a stronger plant not only in this year, but next near in full production.  For Mosaic®, we planted 334,538 pots and for Equinox™ we planted 102,760 pots, allowing for 2-4 pots per hill, depending on spacing. This potting program allows us to get the most out of the roots that we have.

The spring started out quite warm, providing substantial early growth and good timing on getting the hops on the string. After training the warm weather continued for some time creating some instances of too much growth too early. In some varieties this results in early bloom, which can have adverse effects on yield. Hops actively grow up the string, and when bloom sets vegetative growth often ceases.  With that said, most of our hops hit the wire from June 25 to July 4 which is typical. The early bloom will have some negative impact on yield, just how much of an impact has yet to be seen. Weather for the majority of the summer has been warm to hot, with several days reaching over 100 degrees in the Yakima Valley. Some varieties prefer the heat, while others do not respond so well. On the plus side, we’ve had plenty of water. 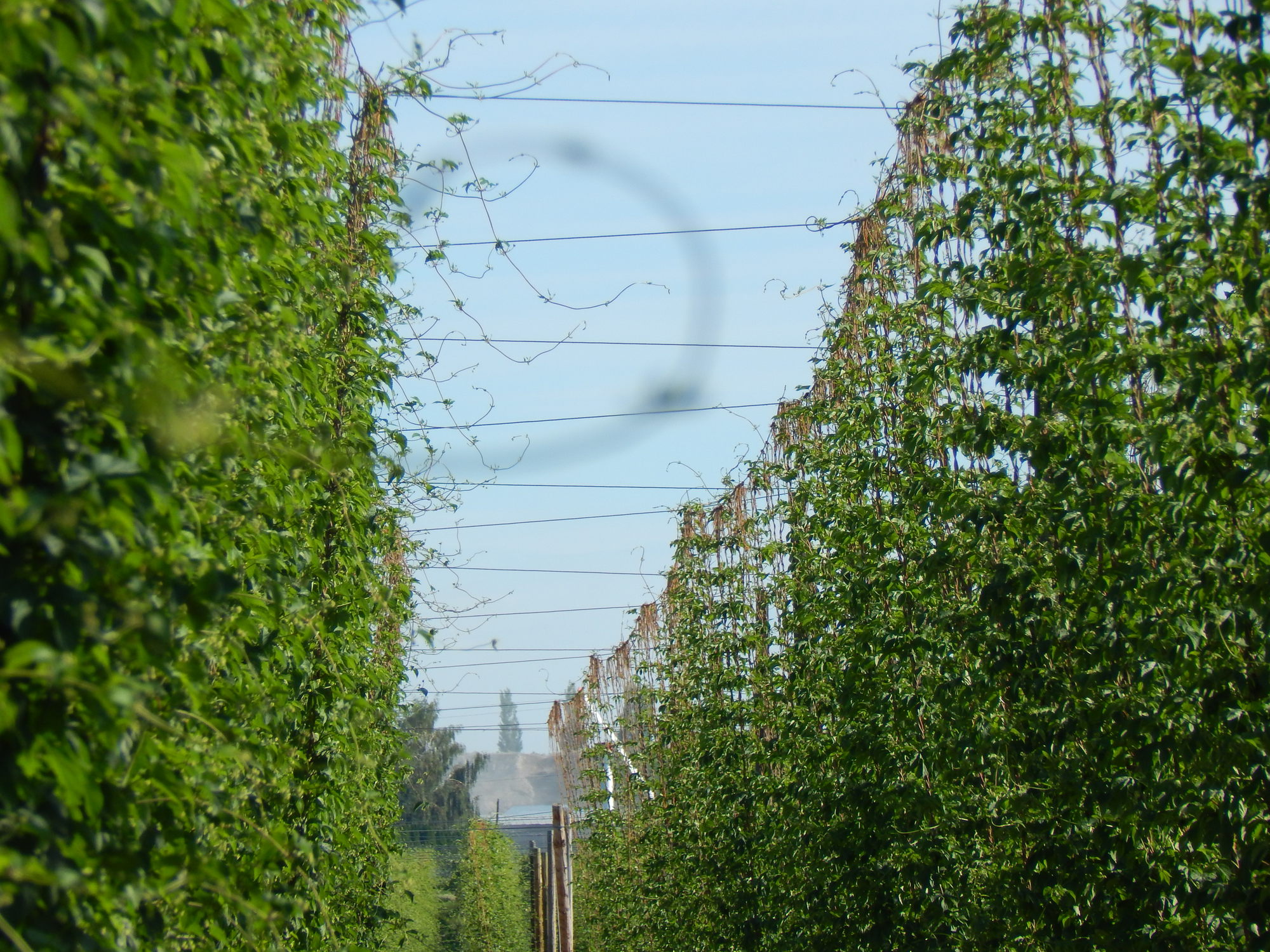 We took our annual mid-summer drive looking at all of our hops to assess any problem areas in the crop, and here are our findings:

Babies look excellent this year with quite a bit of cone set. This is the first year in Idaho and Oregon, and both areas look like they should be strong growing regions. This was the largest year for Simcoe® in terms of expansion, which was a challenge. We only propagate from pure rootstock that is the proper age, typically a 3-4 year old yard, which limited the number of rhizomes available. Mature Simcoe® is a bit more varied, with some very strong yards, as well as some relatively weak yards, but all in all around average. No real red flags for this variety at this point.

In 2013, roughly 2/3 of the Citra® acres were babies, so 2014 did not see a large expansion under the Certified Select™ program due to the large boost we will get in yield on 2 year olds. Around 112 new acres went in the ground. Both babies and mature are looking quite strong this year with no real issues foreseen at this point.

We planted 192 acres of Mosaic® in 2014, nearly all in pots. With this being a newer variety, there was not as much rootstock to propagate off of, so single root pieces were put in potting soil and grown in greenhouses. Mosaic® is very vigorous and has proven to respond quite well to potted propagation. Both baby and mature Mosaic® look quite strong this year. This variety grows well in various soil types, and microclimates, so therefore will hopefully grow into a nice crop. 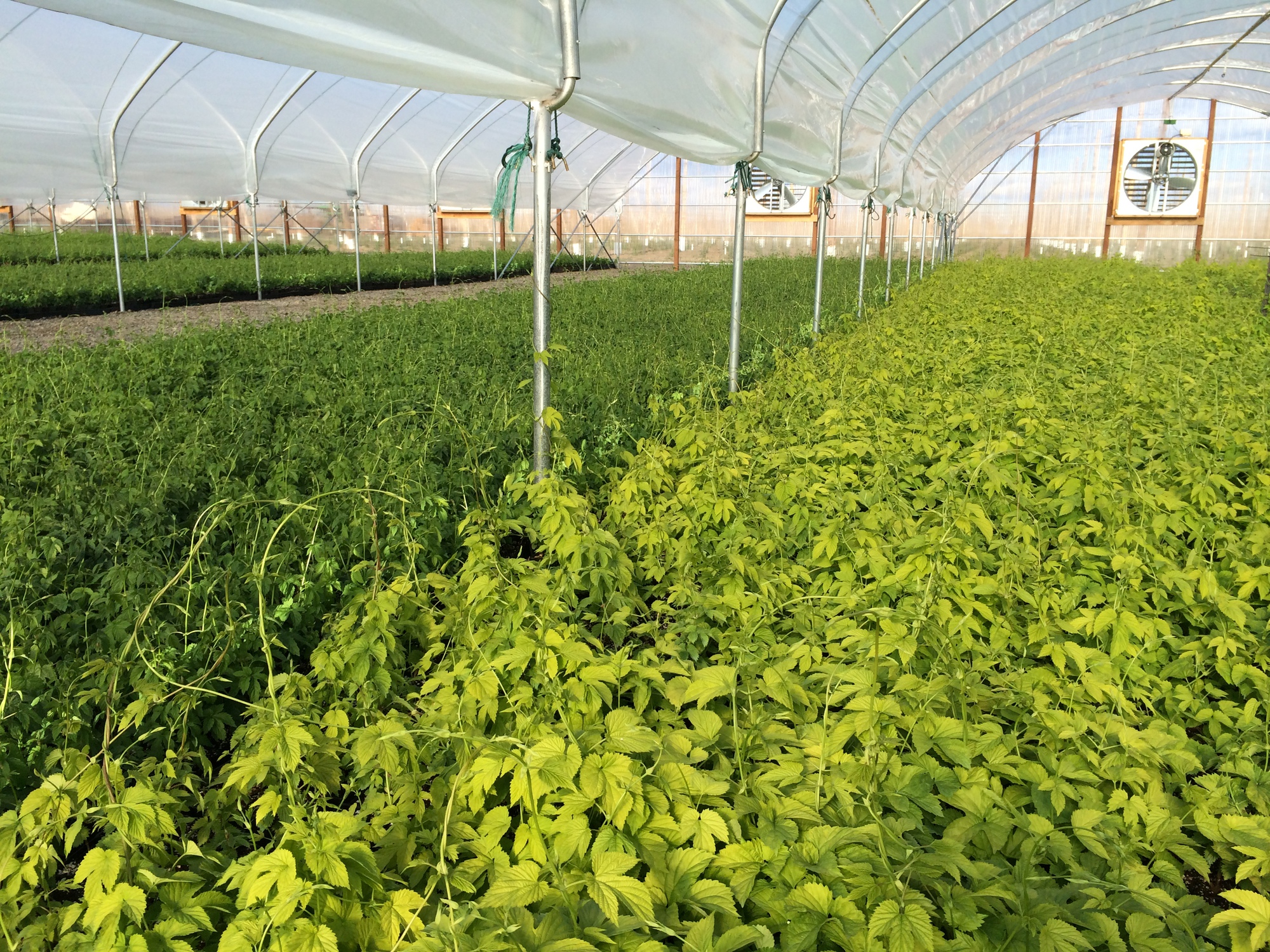 This is the first year that HBC 366, or Equinox™, will be in commercial production. The entire 60 acres planted went into a potting program and were planted in late May. It is known for coming out of the ground a yellow color and turning into a beautiful green as the season matures, which it has done. Growth is relatively even, and so far has met expectations.

We did not expand Ahtanum™ in 2014 because of potential issues with disease and rootstock purity. We are committed to crop quality and will not expand further until these issues are resolved. This involves additional tissue testing and intensive crop monitoring. The crop itself looks to be comparable or slightly better than last year, with light bine growth combined with heavy bloom set. Total production could be alright, but there is a lot of time between now and the mid to late September harvest.

With the possible exception of Ahtanum™, we do not see any reason for concern regarding crop quality or supply of Certified Select® hops. While not perfect, growing conditions have been adequate. The result has been variability in mature yards for an overall average crop. Propagation and establishment of new acreage was smooth and thus baby plantings across the board look strong.

Our growers work hard to bring the highest quality hops to market, and we think so far things are looking pretty good!